BodyMeld‘s mission is to support Zornitsa’s work as well as create programs that further conversation and collaboration in the local and global dance performance field.  We care about  a sustainable dance community and strive to connect with and serve other independent dance/performance makers locally and internationally. We value the exchange of ideas and sharing of methodologies. We care about rigorous research and experimentation in the field of dance both in performance and organizationally.  We strive to create a community curious and excited about blending of genres in performance, experimentalism and, surviving and thriving in hard political climates.

We hope that through mutual effort we can elevate each other and further the research and expressions of dance. Through our programs we also hope to popularize experimental/new dance by making it more accessible and understandable to audiences.

Primarily a choreographer, dancer, and curator, I also do lighting, graphic design, work with video and sound, and am heavily influenced by visual art.  As an immigrant and a mother, my body holds a plethora of identities that shape the content of my work.

As a choreographer I use text, song, man-made materials and movement to create performances. I am drawn to themes of otherness, womanhood, feminism, power dynamics and vulnerability. My work is influenced by surrealism and science fiction and I often engage with my audience by inviting them on stage or choosing a non-traditional venue and format for my work. I also write occasionally for thINKingDANCE.net.

I value experimentation, innovation, visual disorientation and interaction with my audience.  I work from the visual, where producing video and photography often preseed the creation of live performance.  My moto is make it first and after looking at it and examining its social meaning, decide if it needs to be part of the performance.

Since 2013, I have worked with Mylar reflective material, interrogating its potential for cultural meaning while pushing its boundaries into creating new abstract and psychedelic imagery.  The creating of this new sci- fi inspired world started from photography, seeped into film making and most recently with the creation of my latest performance work Un-Seen (2019) and AndroMeda(2020).

A detailed bio you can find here. 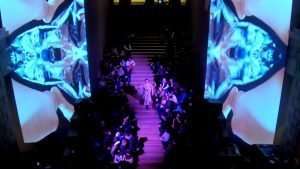 Commissioned by Philadelphia Museum of Art for Friday Remix, in relation to Designs for Different Futures Exhibit, Jan. 31st, 2020. A journey through a futuristic dystopian psyche, AndroMeda comments on the lust for the new and shiny and the cost and gain of technology to our humanness. Featuring a multigenerational cast of some of the best female performers in Philadelphia, Elba Hevia y Vaca, Rhonda Moore and Megan Bridge,  the piece uses multiple projections, inflatable sculpture and dance to create a truly alien experience. 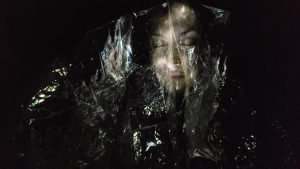 Un-seen is a journey through a surreal and alienated world. Using Mylar material as a metaphor for the American(western) dream, Zornitsa becomes a refugee, looking to be part of this shiny new world.  Partly autobiographical, and partly based on the refugee crisis in both Europe and the U.S., the show traces the use of Mylar in our lives that leads to the disillusionment of the glitzy western world. Un-seen is a fantastical, beautiful and ultimately fraud journey to the “promised land”. 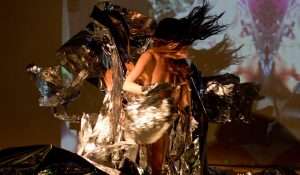 Explicit Female is an immersion into the female body.  Featuring personal narratives, custom designed lighting and live feed special effects, it aims to process the mystery of the shape-shifting form half of the world resides in.  Casual, yet intimate, the performance strives to connect deeply and kinesthetically to the viewers, at times asking them to participate in the very creation of the event itself.

For info to performances, films or photography, please check the menu.

Current: an evening of dance and art (2007 until 2010) was a performance series merging all mediums of art connected to movement and the human body.