On Changing Bodies and Art Mediums

I have known Зоница Стоянова, Основател for just a few months now, but I’ve been seeing her work in dance performance and film/media for much longer. Most recently. I was enraptured (“I saw” just seems too bland) by her dance film dark matter, screened at <fidget>’s Fall Experimental Music Festival. Aesthetically; of course, it was exquisite. But I was more captivated by incredible, somehow inherent meaning by manipulating Mylar with her body (and later the film via editing). The Mylar and her body transcended their culturally associated meaning, although I am not able to verbally articulate exactly that their meaning became for me. Her work completely transfixed me; and so, quite simply (and selfishly), I wanted to see more.

I was four months pregnant when I produced my most ambitious project to date—an evening-length dance installation event for five performers and ten audience members called shatter:::dawn  in May, 2013. Like every self-producing artist, I did everything for it: costumes, lighting design, set, and performance. I was obsessed with light and reflectivity and used Mylar to create the set.

By the time Fringe Festival started in September, my body—a big house of flesh—was waddling down the street in pain. My overly flexible hips were pinching nerves deep in my pelvis, the pain worse than natural birth itself. After getting chiropractic adjustments, I was able to sit, walk, and sleep, but dance was off the table. For the rest of the year I put my creative energy into making baby mobiles and rearranging the house. I knew that I would take a break to give birth, but never expected a whole shift of interest and medium.

As 2014 rolled in, I wanted independence from the small human sucking me dry every three hours. Despite my healing vagina, breasts heavy with milk and the extra belly flesh having a mind of its own, I wanted to dance. Trying to pick up where I left off, I went to rehearsal with the Mylar from my shatter:::dawn set. I was hoping to discover something new, to exercise, and to find a way to create another performance. But I was so sleep deprived that the first couple of rehearsals were mostly indulgent solo naps. That plus the added cost of rehearsal space made it obvious that I needed someone to be accountable to. I started filming myself and inviting friends to improvise together. We did a few shows with these improvisations, but most of the time I found myself behind the lens. I was certain this documentation would lead me to my next choreographed work, but instead the photos and videos took off by themselves. Upon seeing my images on Facebook, an acquaintance from high school invited me to participate in a large photo exhibit in my native Sofia, Bulgaria. It was completely unexpected. 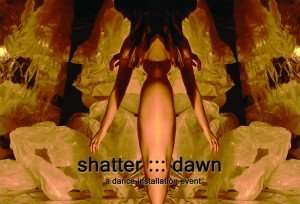 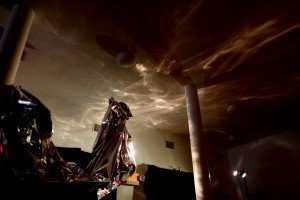 shatter:::dawn 2013 – flyer and picture of the set. The set photo was one of four that was selected for the European Month of Experimental Photography in Sofia, Bulgaria, Oct. 2014. Photos by Zornitsa Stoyanova.

For the rest of that first year as a parent, rehearsal times were sparse. It was so expensive to pay for a studio and a babysitter, so photography quickly turned into my art outlet. It required much less time than creating performance. Often, I would put my son down for a nap and run to the basement to try some long exposure photos. This was when nap time was about an hour and I had to do laundry, cook, clean, and steal some time for art. I started calling these “experiments in light.” It took me many months to realize that I was taking selfies. There was no compositional reason behind it; it was due to the fact that I had no space, no money, and no time—just myself. 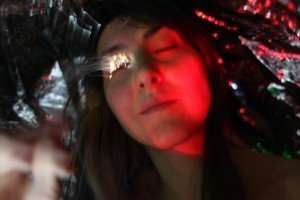 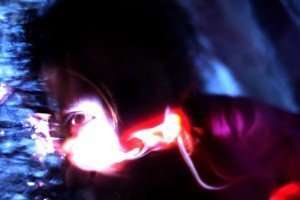 One gloomy January day in 2015, I walked into rehearsal with the decision that I would make a film. I had babysitting all day, which made this idea possible. After months of judging every tourist, I had finally given up and purchased a selfie stick. I knew that I wanted to work with moving background and stationary body; beyond that, I just improvised. It was the first time I shot anything using the selfie stick. At the end of rehearsal I had about 20 minutes of footage. I went home and started playing with editing. The footage was horrible. I thought back to shatter:::dawn’s flyer where I creatively hid my nudity by mirroring my image, and this got me obsessed with symmetry. In less time than I had labored with my son, the first short film Chrysalis was born.

One day my husband, also an artist, mentioned how the Mylar photos were much more exciting and mysterious than the long exposure ones and that the medium could be pushed further. He was right. I hadn’t fully understood Mylar’s potential, its behaviours with light and the imagery it could create. I became interested in how it has a life of its own; an inorganic material, when mirrored, created organic and obvious (to me) maleness or femaleness. I was mesmerized by the alien vagina creatures and kept pushing it further in both the film and still images.

Now I’m using a lot more time in making my film and editing. Inhabiting a shape shifter birthing body has influenced me tremendously, making me seek images of abstracted explicitness and sensuality.

My body and mind are not the same as three years ago. I’ve produced an organ (placenta) that was discarded; I produced a human and gallons of milk. Now my breasts are stretched and empty, my stomach muscles separated. My vagina is scarred and my mind split, one side always thinking about the frustrated little screams and stomping feet of my toddler. Thanks to my residency at The Fidget Space, my performance project, three years in the making, is finally going to happen the last weekend of April 2016. My piece is not going to be about the Mylar from 2013, it will be about my experience as a female body. For the first time as an artist I’m weaving personal narrative into the show and I’m excited and scared.

As part of this show I’m also doing a solo visual art exhibit for First Friday in Old City.* That exhibit will include some of my photography and videos and will be a small fundraiser for the show later that month. I need very little money to put on the solo, and I’m hoping that some of the proceeds would go towards creating a small residency for mother-performance artists at Mascher and The Fidget spaces.

Being a mom has not gotten easier, but I’ve gotten better at managing my time. With every image I take and video I shoot I learn something new about digital art. I’m ever-curious about abstraction and perception of the human/female body and continue to explore how it works in live performance and visual art.

I leave you with a tease from my latest dance short—Legs Apart.

To all the mom artist out there—be brave and keep breathing. It gets easier over time. Paying someone to watch your child while you sleep is worth it. And don’t be afraid to become something else entirely.

* Editor’s note: due to 1fiftyone gallery + performance space being temporarily shut down, Stoyanova’s gallery show has been cancelled. She will be holding a crowdfunding campaign, for which she will post details on her website.

press kit in PDF
Thanks for subscribing! Please check your email for further instructions.