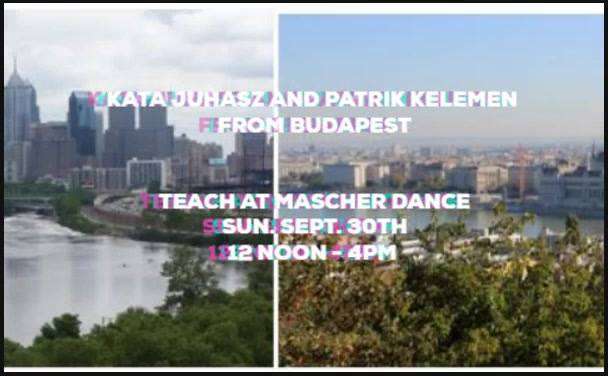 Flowing low – dancing high
The underlying theme of the class is circular motion and its quintessence the spiral.
Get into the centri-fugue state!

Description:
After an exhilarating warm-up, we are going to have some skill practices, developing and experimenting with phrases and creative tasks. The beginning is based on yoga-postures and pilates exercises with a body-mind knowledge that allows body flowing movements in space. All that will be followed by floor work phrases, then the class evolves through standing up step by step with a lot of dancing. Including proper breathing which supports the continuity of the movements, the work is focused on feeling the body, the space and each other from an inner perspective.

How do we interpret a body? What is it really made of?
Can we create bodies? Can bodies create dance?
Is movement bound to the corpus or the other way around?

In this workshop we are to create a fantastic body image that’ll lead our actual corporeal self into dance. Through the deployment of imagination, knowledge on eastern medicine, meridian work and exercises of visualization we aim to reach a state of semi-autonomous movement.

I propose to use non-human figures, which our proprioceptive data may be fed into.

She addresses her “stageworks” to specific groups of society focusing on topics relevant to all. Her company recently developed a full repertory targeted to different age-groups from the youngest audiences to the elderly. Her choreographies are interactive multidisciplinary art forms merging live music, video art, spoken words, new circus and more.

She has been teaching contemporary dance and dance anatomy since 1996 all over Hungary and in several countries: Japan, Germany, France, and Russia. She founded the MU Terminal postgraduate dancers’ education program in 2005. She was touring with her own choreographic works among others in Germany, Russia, Israel, Denmark, Macedonia, Egypt, Poland, Italy and Romania. Her first dance movie “Maya” was selected in the 42nd Hungarian Film Week competition in the short films category and was the opening movie of CINEDANS Festival 2010 in Amsterdam.

She has had a unique dance career. Kata ice-skated in her childhood during the soviet era and later studied classical ballet and modern dance in Budapest. She first appeared on stage dancing in musicals, while attending Medical University then graduating as a physician. She studied classical and Graham technique in Columbus, Ohio in 1992. She became familiar with contemporary dance at Tanzwochen in Vienna and during scholarships in Paris. In 1998 she got the chance to participate in Dance Web Scholarship Programme in Vienna. She studied one semester at the Centre National de la Danse Contemporaine (CNDC), Angers. She is a BASI Pilates teacher as well. From 1998-2006 she was a dancer of the French-Hungarian dance company, Cie. Pal Frenak. She worked -among others- with Carlotta Ikeda and with Nigel Charnock (DV8).

Patrik Kelemen, is an emerging choreographer in Budapest. He has collaborated with other choreographers and currently is working on a new solo Celestine, “dealing with things coming from the sky thus addressing the otherworldly traits of dance in a poetic manner.”

Kelemen as noted when citing the BILATERAL Exchange that there are “growing currents of autonomous, micro-scenes are emerging within each major European city – that herald their own local circle of artists, circle of values and circle of dance- and theatre making. They seclude themselves, as resources for touring & programming are scarce. As a young artist participating in the circulation of one of this ecosystem I find it hard to enjoy or even to grasp the true diversity of today’s contemporary dance. Thus, any program that sets out to address this issue and bridge diverse points of view are valuable.”
_________________
This workshop is a partnership between Mascher Dance and Philadelphia Dance Projects, organized by Zornitsa Stoyanova