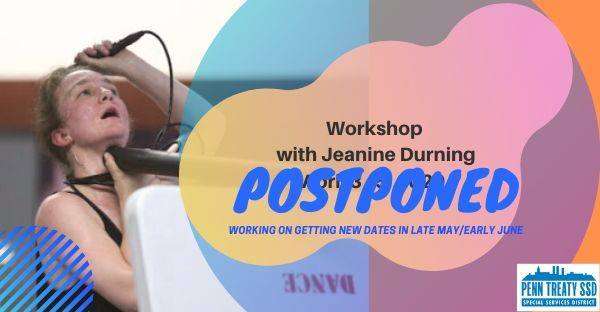 WE ARE POSTPONING DUE TO COVID-19 PANDEMIC.
STAY TUNED, WE ARE WORKING ON FINDING DATES IN LATE MAY/EARLY JUNE.
______________
While Jeanine is in town teaching a longer workshop series (for more info on that: http://bit.ly/jeanine-durning) she will teach an abridged version of the workshop, open for anyone.

This workshop is capped at 30 people, and is first come first serve. Pay through PayPal (ticket link, above) to reserve your spot.

About Jeanine:
Jeanine Durning is an Alpert Award winning choreographer and performer from New York whose work has been described by The New Yorker as having both “the potential for philosophical revelation and theatrical disaster.”

Durning is interested in choreography as a ways and means to mobilize questions about how our basic need for connection and communication aligns, and often misaligns, with how our thinking and feeling come to form and action. She has an ongoing practice, nonstopping, which has yielded several performance works, including her solo inging (based on nonstop speaking). She has performed inging more than 50 times across the US, in Europe and Canada. In support of my new project Dark Matters, Durning has received residencies at Seoul Dance Center, the Rauschenberg Foundation, MANCC, and at DNK in Sofia, Bulgaria.

Jeanine has had the privilege to collaborate with many choreographers, including Deborah Hay since 2005, working as performer, consultant, choreographic assistant, coach, and from 2011-2013, as consultant to the Motion Bank, a project of William Forsythe, on Ms. Hay’s choreographic and scoring practices. Durning has shared some of her practices all over the world and was recently Guest Lecturer at Smith College in Western, Massachusetts.

Upcoming projects for 2020 include a new work commissioned by Candoco/London, performing Big Dance Theater’s adaptation of Anne Carson’s Antigonik (playing the titular role), and a European tour of Deborah Hay’s new work Animals on the Beach.