Original article you can see here.

Zornitsa Stoyanova started Get What You Need (GWYN) in 2015 as an open-mic style community dance workshop. In 2019, Stoyanova launched a new dance platform, BodyMeld, reimagining GWYN as a seven month-long residency supporting two local artists, Mira Treatman and Janna Meiring. Every month, these artists have shown their works-in-progress at different arts spaces, receiving feedback from a mentor and the community. The program has continued virtually through the COVID-19 pandemic, and the final showing coincided with the first night of curfew in Philadelphia   following the murder of George Floyd. I sat down with Stoyanova, Treatman, and Meiring* to discuss this unpredictable process.

MC: Where does the name Get What You Need come from?

ZS: “Get what you need” is a saying that Deborah Hay uses in her warmup. As you move your whole self through space, you get what you need. After I gave birth to my first son, I felt like I was never going to get what I needed. I realized that I value process deeply, and I needed to be in the room with people in process. I kept hearing “we really need this” and thinking about a platform that could serve people better.

MC: Tell us about the work you created during this residency.

MT: My work is called Supernatural Displays of Yearning. The name is influenced by the term Public Displays of Affection. I’ve been researching social/choreographic divides, trying to blur them. The other thread of my interest is the song as a point of departure. The structure of a song is a way for me to interrogate dance and make statements about my body in performance.

JM: My wife is from Puerto Rico, and their first language is Spanish. I have worked in many places where the majority of people speak Spanish. I had a lot of opportunities to learn Spanish, and I never took the chance. I wanted to dig into it publicly.

MC: Was there a particular moment when a mentor affected your work?

JM: Amy Smith challenged me to contemplate the form of my work and gave me a few examples of folks that are shaking things up in terms of how they challenge the audience. I also learned a lot from watching Keila Cordova make suggestions in regards to Mira’s work, seemingly random ideas that kicked a little fire into it. I got excited to get into the studio with my own work after that.

MT: I feel a little vulnerable sharing this, but Silvana Cardell said “you’re a really strong dancer.” That validation meant everything to me. I’ve been body shamed, put down, told I’m illegitimate, told my work isn’t dance. If I’d been able to continue the project not through a screen, I would have continued to go as big and strong with my movement quality as Silvana was encouraging.

MC: How has the residency evolved in the quarantined, COVID world?

MT: I live in a very small apartment by myself. I gave up on a lot of my physical practices and put everything into my fingers. I consider coordinating the fingers from scratch to be a dance, a choreography. I’m still dancing. Just in a very small space with my fingers.

ZS: When there are no distractions of who’s doing what onstage and where the action happens—all those compositional tools that feed us so deeply—the question “why is this work important to me” is the most important.

MC: You held a virtual public showing at the end of this residency. It happened to be the first night of curfew following George Floyd’s murder. What did sharing that time mean to you?

ZS: When I got the curfew message, I felt fear and dread. At the same time, I felt really grateful to be where I was at that moment with everybody present.

JM: In my work, I want to ask myself, “how do I engage with this world that I’ve inherited? What can I take apart and re-form in a way that is intentional?” I wanted to hold in my consciousness, awareness, heart, and body, that that evening was not about glorifying my work. We were all in agreement about that. There’s a much bigger fight going on.

MT: My grandfather was a sock, hosiery, and textile manufacturer during the 1964 Race Riots in Philadelphia. The lesson he passed down is “you have to keep going. You have to stand with the people and help them rebuild.” After our performance, I witnessed the restaurant across the street get their windows smashed. I felt reluctant to present my work that night, and if there’s anything I want to go back and share, it would be the sound of glass being smashed.

MC: Tell us a bit about the future of GWYN.

ZS: My family has decided to move back to Bulgaria, so I have to give GWYN to somebody. I’ve always wanted to decentralize it. I am in the process of talking to many different folks about creating an equity based structure for GWYN.

JM: In order to facilitate more effectively and equitably, we need to have more folks of color and more representatives outside of the narrow, already represented form of dance.

ZS: We will be sending out a survey this summer, asking what people need after this. We want GWYN to serve the Philadelphia dance community. We want it to be from the community for the community.

*Stoyanova, Treatman, and Meiring have all written for thINKingDANCE. I participated in the GWYN residency program in February as a guest artist.

for Thinkingdance.net By Megan Bridge Jan. 18, 2012 She is Baroque. Her gestures are precise, formal…they are telling us something and it […] 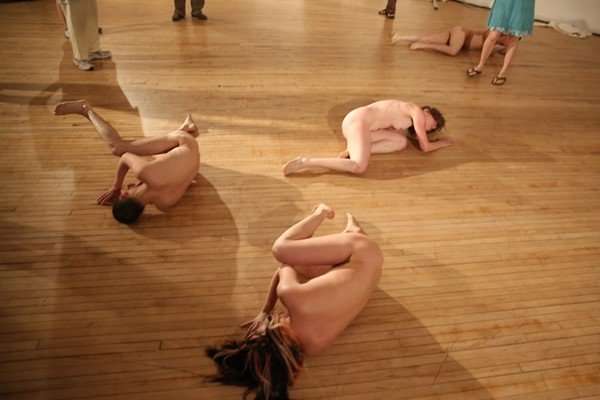 BY ZORNITSA STOYANOVA | Feb. 12, 2018 | Written and published for thINKingDANCE.net A pair of dancers (Margot Electra Steinberg and Mary-Carmen […]